PBC Environmental Coalition Supports the Prison Ecology Project... You should too!

Earlier this month a Lake Worth-based organization, the Human Rights Defense Center (HRDC), submitted a public comment to the Environmental Protection Agency (EPA) that provides input on the agency’s EJ 2020 Action Agenda Framework, highlighting the lack of consideration for environmental justice among the millions of prisoners in the United States. The comment was co-signed by the Palm Beach County Environmental Coalition, along with 92 other social justice, environmental and prisoners’ rights organizations from across the country.

HRDC has also announced the beginning of its Prison Ecology Project, an effort to organize at the intersection of mass incarceration and environmental pollution, and has launched a fundraising campaign to build off the recent EJ 2020 comment and fight against a new federal prison on endangered species habitat in southern Appalachia.

“It’s encouraging to see the EPA attempting to increase the effectiveness of protecting vulnerable communities that have been overburdened by industrial pollution, but a significant component is missing when impacts on millions of prisoners and their families are ignored,” said Panagioti Tsolkas, coordinator of HRDC’s Prison Ecology Project.

HRDC’s comment elaborates on examples nationwide which illustrate a clear need to protect prisoners as a population that faces extreme environmental justice impacts. For example, prisons and jails built on or near landfills, toxic waste dumps, Superfund cleanup sites and coal mining sites, or that are vulnerable to natural disasters such as flooding and environmental hazards like contaminated water. The comment filed with the EPA can be found online here.

According to the comment submitted by HRDC, there is overwhelming evidence that the population of people in prison represents one of the most vulnerable and uniquely-overburdened demographics in our nation.
The comment notes that prison populations are almost entirely low-income and that black, Hispanic/Latino and Native Americans are consistently overrepresented in every one of the 50 states.

Environmental permits which fail to meet the environmental justice standards set in place 20 years ago may violate the Civil Rights Act. Title VI of the Act explicitly prohibits discrimination by government agencies that receive federal funds; if an agency is found in violation of Title VI, that agency may lose its federal funding. The prison sector should not be an exception.
“Those unfamiliar with the conditions in America’s prisons may balk at our allegations but the EPA cannot claim to be among the uninformed,” Tsolkas stated.

On February 5, 2015, Tsolkas conducted an interview with an EPA representative from Region III who explicitly stated that environmental justice guidelines have not been applied to prisoners for the purpose of permitting under the National Environmental Policy Act because the EPA uses data that fails to take prisoner populations into account.

EPA Region III, which encompasses the Mid-Atlantic, conducted an initiative in which numerous prison inspections by the agency resulted in enforcement actions between 1999 and 2011, ranging from issues surrounding the disposal of hazardous waste to violations of air and water standards, primarily due to prison overcrowding. The Department of Justice’s Office of  the Inspector General has also cited various violations of health, safety and environmental laws, regulations and Bureau of Prisons policies specifically related to industrial operations within federal prisons.

Yet the EPA has never cited the health and safety of prisoners exposed to such environmental conditions as a factor in prison inspections or in the permitting of new facilities.

“Ironically, prisoners are frequently counted for the purpose of gerrymandering voting districts,” observed HRDC executive director Paul Wright. “So why are we missing the mark in terms of environmental protections for those forced to live inside toxic prisons, such as facilities built on coal mining sites or waste dumps?”

it is good idea and I support it..
Click here for By Gary Volk Design

CLICK HERE TO SUPPORT OUR FIGHT FOR THE FOREST: Help stop Scripps Biotech and United Technologies from destroying the Briger Forest and polluting surrounding communities with over-development and hazardous waste. 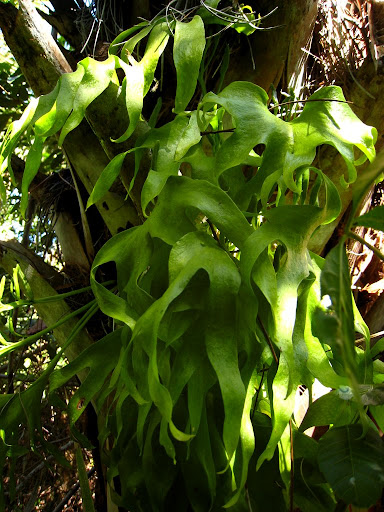 Hand Fern, one of the endangered plants on the 700 acre site. Click image for PBCEC's report on development plan

Sign the petition against Scripps expansion onto the Briger Tract 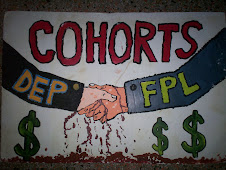 FPL plant at the headwaters of the Loxahatchee Refuge

New view thanks to FPL and DEP from Stormwater Treatment Area (STA) 1E on Southern Blvd/SR80 which was recently opened for public recreation. [click image for more photos]

After the long battle for public access, the Creek is now facing the threat of large-scale development in it's watershed, which is critical habitat for Florida Panther and Black Bear. No Blue Head Ranch! No more Cemex mining!

Find out the latest from...

What DEP means to us.. 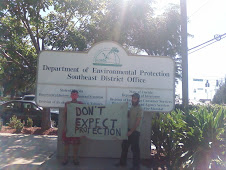 October 27, 2008 DEP canceled a public hearing to accomodate FPL's WCEC expansion. They are the facilitators of Florida's destruction. 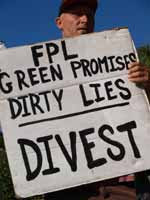 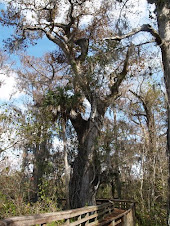 After the past 2 years of demanding accountability from FPL. WE WON a first step... Barley Barber is now re-opened to the public for tours. The next step is granting this waterway protection as "Waters of the State."

check out the latest from the Everglades Uprising

PBCEC supported Broward activists in fighting for the last remaining wildlands .. AND WE WON!

High Horse Ranch, Indiantown.. Now threatened, along with dozens of ranches and wildlife areas, by a proposed (unnecessary) expansion of State Road 710.

"Welcome to the Everglades Uprising!" 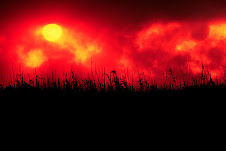 a beautiful wildfire blazes across the Everglades Wildlife Management Area at sunset, in Broward County

a note on this webpage from PBCEC co-chair:

"With a healthy fusion of enthusiasm and skepticism, we have taken a small step towards establishing a consistent presence in the virtual world for the PBCEC. The site will contain a mixture of updates, announcements, meeting notes, calls to action, fund-raising pleas, and ranting from a local grassroots ecological perspective. Your feedback and input is valued, but please also keep this in mind (here is the 'skepticism' part):

Our power does not come from the internet, it comes from real-live actions, face-to-face support for each other at meetings and events and our physical presence in-the-face of ecological degradation..

So use this site as an opportunity to keep up with and support the PBCEC's efforts; but please do not use it as an excuse to keep yourself indoors staring at this electronic screen. In other words, i hope to see y'all out in the streets, where the real changes need to happen!"

from within the wild weeds of the saw-and-sea-grass roots,
panagioti tsolkas
sept. 23, 2007 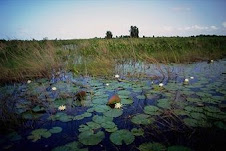 we collected hundreds of petition signatures on Clematis 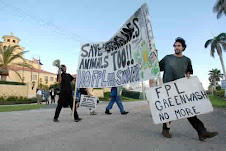 Crist was a no-show, but we were there and got great coverage anyway... 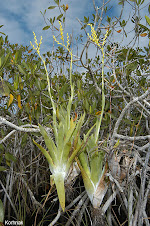 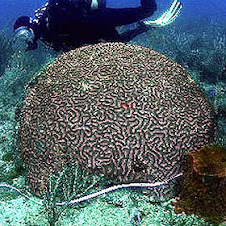 PBCEC was instrumental in turning public opinion against the failed Biotech Research Park... 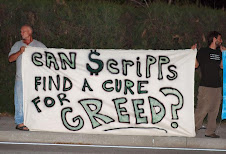 We filed lawsuits that are still pending against political corruption in the Scripps land deals. We exposed the crooked corporate biotech agenda. And we intend to continue keeping pressure on Scripps in defense of the Briger tract and in support of animals' rights over bloated pharmaceutical profits. 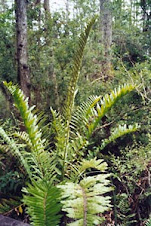 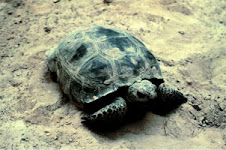 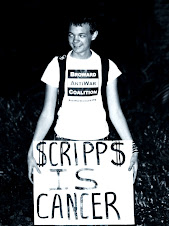 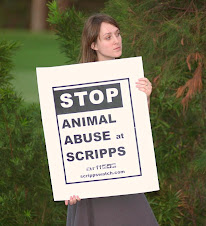 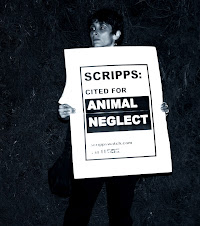 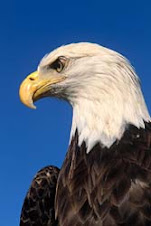 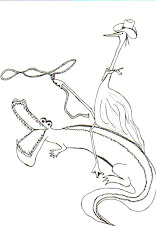 FPL's "Gateway to the Glades" West County Energy Center units 1 and 2 in the Loxahatchee Basin, 1000 feet from the National Wildlife Refuge

After 5 day stand-off with Sheriff, a group enters swamp; several chains themselves to trees and demand FPL re-open the swamp and admit impacts of hydrologic alterations

FPL claim ownership over one of Florida's last groves of old growth Bald Cypress, we hope to see this forested waterway turned over to the public and truly protected

Direct Action Gets the Goods! 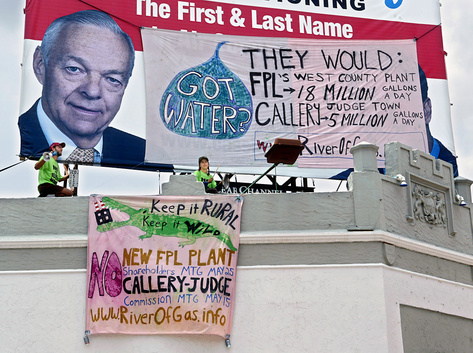 Everglades Earth First! activists involved with PBCEC hang a banner on a billboard and over the side of a building on the southeast corner of Dixie Hwy. and Banyan in downtown West Palm Beach Monday afternoon to protest Callery-Judge and FPL developments. The protesters were there for nearly two hours before West Palm Beach police, with assistance from Palm Beach County firefighters, went up to remove them and carry them to jail. (Photo by Damon Higgins/PB Post) 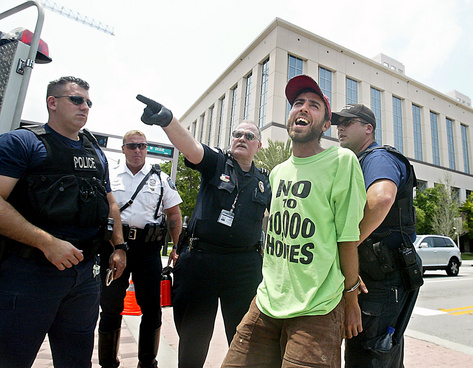 PBCEC co-chair, panagioti tsolkas, gets arrested during rooftop protest downtown West Palm while sounding the alarm on Callery-Judge vote and FPL's sprawl-inspired power plant in western Palm Beach County. A day later, Callery-Judge was defeated in the County Commission. Litigation against FPL plant is still pending. Paul Revere would be proud... (Thanks to Damon Higgins/PB Post for photo)

Check out this piece of promotional material! Sorry FPL, it's not a very encouraging picture... 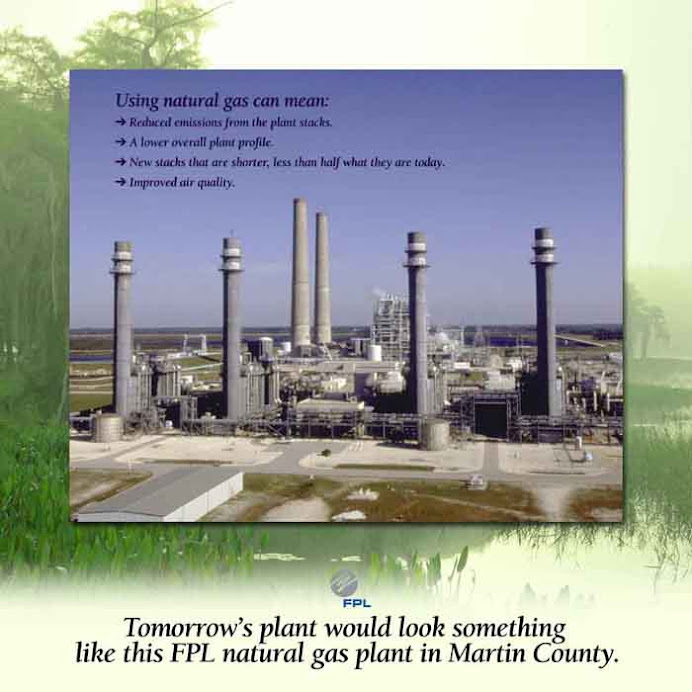 Tomorrow's plant may look more like a pile of rubble and a couple more federal indictments. And if we're to succeed in reducing our carbon emissions to level demanded to avert climate catastrophe, giant fossil fuel plants like FPL's Barley Barber pictured above will also have to go. It's time to wake up y'all...

This picture is from the FPL-owned Seabrook Nuke Plant, which had a recent accident... 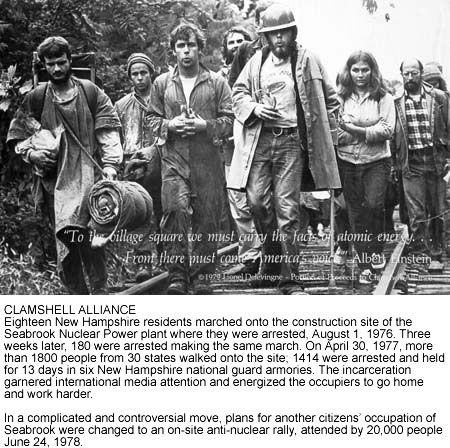 The movement that successfully fought the nuclear industry 30 years ago, shutting down hundreds of proposed power plants across the world, must be revived against the fossil fuel giants--civil disobedience and all--if we are to avert the coming catastrophic climate change. The PBCEC will be hosting training to prepare for local civil disobedience protests locally.

Activists in Virginia put their bodies on the line to stop dirty power...